The first World AIDS Day (WAD) happened 23 years ago on December 1st to raise awareness of what became, and arguably still remains, the most stigmatized virus on our planet. Stigma is defined as “a connotation of disgrace associated with certain things”. Stigma continues to impact millions of people around the world, and stigma is intrinsically linked to the reason approximately 60 million people have contracted the virus.

Since the first diagnoses in 1981 UNAIDS reports that HIV/AIDS has killed approximately 30 million people worldwide. This staggering number falls just short of the total population of Canada. One can only speculate the lives that may have been spared had stigma not impeded the response needed to stem the tide of infections and subsequent deaths.

In the 1980s, HIV, the virus known to cause AIDS, initiated its assault on gay men and Haitians and moved into other populations such as injection drug users and members of Aboriginal community. While many dismissed AIDS as a mostly "gay disease", the insidious virus began to take hold across sub-Saharan Africa in what became a well-publicized pandemic of enormous proportion. Suddenly AIDS was black, straight and someplace else! While many political leaders wouldn’t acknowledge emergence of the virus in the early days, activists and humanitarians around the world launched fervent efforts to bring about a response commensurate with rising infection rates and the mounting death toll.
World AIDS Day was launched to increase awareness, fight pervasive stigma and, in part, to raise funds. Today WAD continues to be an important annual marker of the work done within this movement. It is also a day to take time to remember those we have lost, honour those living with HIV/AIDS and celebrate all that has been accomplished in the movement. WAD is also important to help remind people that HIV/AIDS has not gone away and that there are many things still to be done in HIV/AIDS work.

Because of the development and improvement of life saving medications over the past 15 years the situation with HIV/AIDS has improved for millions living with the virus. This “optimism” has inspired the new WAD campaign entitled “Getting to Zero”. The theme will be used until 2015 and echoes the UNAIDS vision of achieving “Zero new HIV infections, Zero discrimination and Zero AIDS-related deaths.” It’s an ambitious vision and one that Regional HIV/AIDS Connection fully endorses.

However in order to realize such an ambitious vision it will require a critical mass shift in how we think about HIV/AIDS. The fact is more and more people are living with HIV each day. These same people are often living in fear from stigma imposed on them by society. Together we can get to the root of HIV/AIDS discrimination - stigma. Those of us in this movement call upon society to examine attitudes, beliefs and biases about HIV/AIDS. It is time to abandon stigmatizing thoughts about the virus and those living with or at risk for HIV/AIDS.

People who work daily in AIDS service organizations know that not only “certain kinds of people” get HIV/AIDS. There are certain kinds of risk factors related to acquiring HIV, but we refute that people living with HIV/AIDS should be categorized as innocent victims and those who deserve the virus. We encourage you to take some time to learn about HIV risk at www.hivaidsconnection.ca and ask yourself, “Could it ever happen to me?”

Check your HIV/AIDS bias and get stigma to zero!

The holiday season will soon be upon us, which means that the Annual Holiday Client Dinner is coming up! Clients of RHAC are invited to attend the Annual Client Holiday Dinner, to be held on December 12th at the Byron Community Church (336 Glenrose Dr., Byron). The festivities start at 5:00 pm, with dinner at 6:00 and Santa Claus arriving at 7:30.

There will be a traditional holiday dinner, raffles, door prizes and gift bags. Transportation is available, but you will need to RSVP.

For more information or to RSVP, contact Rob Newman or check out the poster!

The Grand Bend Area Community Health Center is hosting a Well Women's Health Day on November 22nd at 7 pm. The event will feature RHAC's Bonnie Baynham presenting on Women's Sexual Health, as well as presentations from Mickey Gurbin on Women and Anxiety and a presentation called Health by Chocolate! from Miranda Burgess. Additionally, breast and pap exams will be available to women without a health care provider on site from 9 am - 4 pm that day.

The Grand Bend Area Community Health Centre is located at 69 Main St. E., Grand Bend. For more information on the event, check out this poster or contact Bonnie Baynham.

There will be a workshop on Women, HIV and Housing on Monday, November 14th at 7:00. The workshop will be at the Central Library (251 Dundas St., London) in the Stevenson and Hunt Meeting Room.

Having a safe and affordable place to live is important to everyone's quality of life. When you are a woman who is HIV+, it is also an important part of taking care of your overall health. Bonnie Baynham and Shannon Dougherty of Regional HIV/AIDS Connection, along with Dr. Margaret Pelz, will explore HIV as an illness, the implications and exploration of the issues, and future recommendations for interventions needed to address prevention and supports for women.

For more information, check out this poster or contact Bonnie Baynham.

For more information, contact Zach Templeman and check out the poster!

We are pleased to announce that we will be starting monthly Lunch and Learn sessions for people living with Hepatitis C. These Lunch and Learns will be on the second Friday of every month from 12:30 - 1:30 pm in the board room of RHAC. The first session will be on Friday, October 14th and the topic will be Hepatitis C Basics.

Free lunch will be provided.

The schedule of topics for the next few months are:

For more information on the Lunch and Learns, contact Zach Templeman. 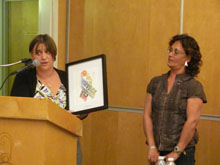 Ana Maria Castillo (pictured on the right) was given the first ever Hope Award at the agency's annual general meeting on September 8. We are thrilled that Ana Maria is the first recipient of this award. Her more than 20 years of activism, optimism and support of our community is a rare treasure, just like her!

The award is one of three: Voice, Knowledge and Hope, conceived this year to reflect the outstanding contributions of volunteers to the work of the agency. One may be awarded each year on a rotating basis.

The Hope Award is given in honour of the Newman family who, in October 1991, chose to make their HIV status public and spoke out against stigma and discrimination. In facing the loss of Robbie and Kim, the remaining members of the Newman family continue to inspire hope for those living with HIV that they can "survive and thrive" enjoying life and contributing to their communities.

Are you a straight (heterosexual) Black man living in London? If so, you are invited to participate in a focus group with other straight Black men. This focus group is a part of the iSpeak research project.

The iSpeak research project is a project focusing on African, Caribbean and Black (ACB) straight men community in Ontario. African, Caribbean and Black people account for a disproportionately high share of the numbers of people in Ontario living with HIV.  ACB men are particularly affected, accounting for an estimated 60% of ACB people infected with HIV (not including ACB men infected through sex with other men).  Moreover, it has been estimated that less than half of ACB men who are infected with HIV are actually aware of their infection.  However, AIDS service organizations, researchers and policy makers have continued to focus their efforts on ACB women and gay and bisexual men.

Download this poster to find out more information about signing up for the focus group.

On October 7th, 2011, RHAC along with the Middlesex-London Health Unit and My Sister's Place will be hosting a workshop for service providers who may have clients in the sex trade. Download this flyer to find out more information on this training opportunity.

RHAC operates a monthly food bank for HIV+ people who are living on limited incomes and/or struggling with health issues. We receive a generous amount of non-perishables from the London Food Bank four times a year, as well as ongoing regular donations from St. George’s Presbyterian Church and Metropolitan Community Church. We are grateful for these donations.

But due to an increase in the number of people accessing our food bank, known as the Country Cupboard, this season we are running low on supplies!!

Thank you so much for your support!

RHAC in your Community